Here is How Leaders Can Overcome Bias: 3 Proven Tactics from Research

Are You Biased? Don’t Say No Until You Imagine This.

You’re driving to work. Sipping your coffee. Listening to your favorite morning show. At the most traffic-jammed intersection of your drive, someone squeezes in between you and the car just ahead. How do you feel? Right. What a jerk!

Now imagine you stop for gas. You try pulling out of the convenience store into the same intersection. And what happens? Nobody will let you merge. After fuming for 3 minutes you jam your way in, causing the person behind you to hit their brakes (and salute you). Now how do you feel? Right again. What a bunch of jerks!

You see yourself as the hero of both of these driving stories, overcoming all those villains on the roadways. But are you always an angel on the road? Yeah, me either.

We see our own behavior in the best light possible. When we react to something (like traffic) we explain our behavior based on the situation. But the behavior of others? Well that’s a different story. We explain other people’s behavior based on traits. This is called Actor-Observer Bias (or Fundamental Attribution Error if you want to get real fancy-schmancy). And it is just one cognitive bias that impacts your leadership.

Let’s Start with the Obvious. Very Few People Think They Are Biased.

Bias is how other people behave (there goes that Actor-Observer bias again). Bias is a leadership “blindspot” lurking in the background. It’s rarely overt or even conscious. It’s implicit and hidden from plain sight.

The best book I’ve read on implicit bias is Blindspot: Hidden Biases of Good People by Mahzarin R. Banaji and Anthony G. Greenwald. Their main message is that we all experience bias:

A quarter century ago, most psychologists believed that human behavior was primarily guided by conscious thoughts and feelings. Nowadays the majority will readily agree that much of human judgment and behavior is produced with little conscious thought.

Banaji and Greenwald find we often react to things without even thinking about it. It is part of our System 1 (automatic) thinking. Every day we unconsciously react to people and situations based on bias we don’t realize we have. Or worse, bias that we tell ourselves we don’t have. Even professor Banaji, who dedicates his career to overcoming bias in society, tests out as showing an automatic preference in favor of Whites.

Three Ways to Overcome Your Own Bias as a Leader

We rarely think about our biases. We don’t want to think about them. Or we think we aren’t biased when our actions tell a different story. Dostoyevski calls them “colorless lies” because they are lies we don’t even reveal to ourselves.

The fact is, our biases run the show more often than we realize. And that’s a problem. Because if we operate on autopilot our behavior won’t change. But once you shine a light on bias you give yourself a shot to question your assumptions. Here are three research-backed ways you can manage your bias:

Step one is switch off the autopilot every once in a while. Professor Banaji and another colleague created numerous tests that reveal implicit bias. If you feel like doing some self-awareness work I encourage you to check out the Implicit Association Tests. They were very eye-opening for me (and my family).

The Implicit Association Tests focus mainly on traits like race, culture, age, and gender. Knowing your implicit bias in these areas is obviously very important. But you also need to check for cognitive bias like the Actor-Observer bias. Things like Confirmation bias and the Semmelweis Reflex, are bugs in your cognitive operating system. Here’s a great visual of the most common cognitive bias: 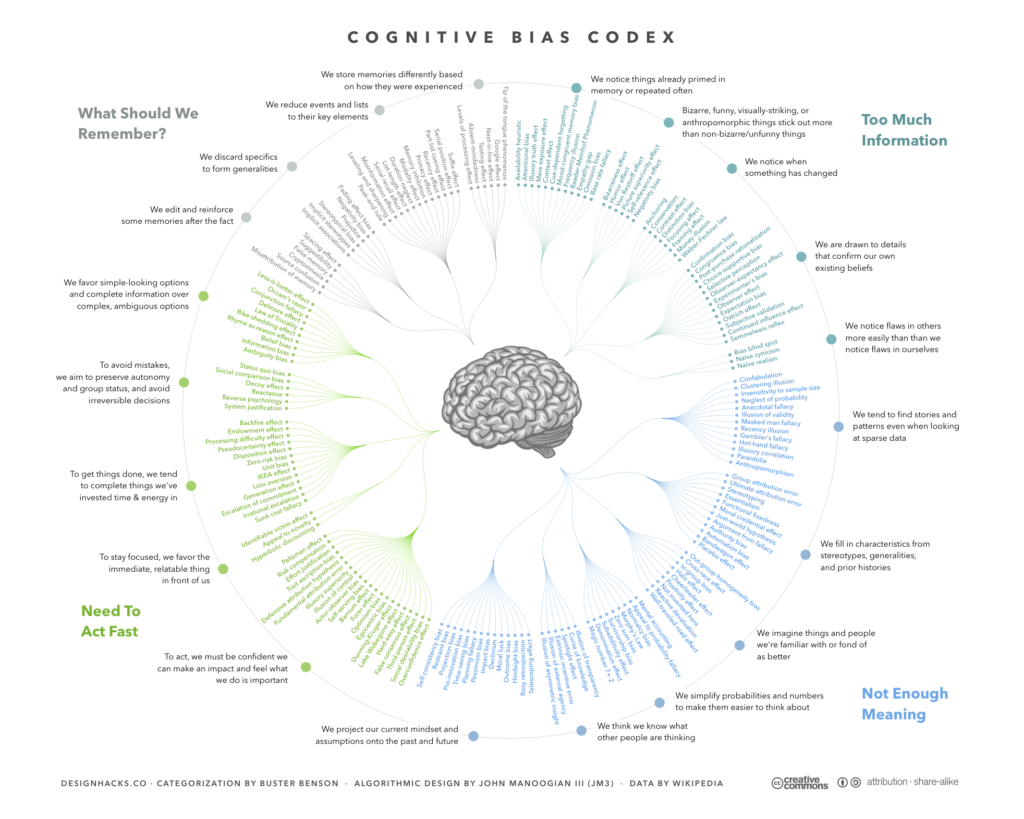 The bad news is we all have bias. We rarely question whether it’s impacting our decisions or behavior (spoiler alert: it is). What’s worse, even if you know you have bias you won’t “cure” your implicit or cognitive bias. Professors Banaji and Greenwald lament:

As disappointing as it was to discover that the tests revealed associations that we preferred not to have, it was even more disappointing to observe that our results for these tests changed little over time, as we took them repeatedly. Awareness of the hidden biases did not seem to help us to eradicate them.

Once you understand your potential bias, instead of trying to eliminate it you should manage it. To do that you move to step 2.

2. Teach Yourself to Turn Off (and Sometimes Turn On) Your Autopilot

Our implicit or cognitive bias doesn’t happen in a vacuum. It’s situational. It occurs when we make a decision or respond to a situation. These are “triggers” and each one is an opportunity to question (or act based on) bias. For example, consider these situations:

Each one of these might seem like a reasonable reaction. Sometimes language and weight restrictions rise to the level of actual job requirements. But we often don’t question the assumptions behind these reactions. Any of them could be due to implicit or cognitive bias.

We always see our own behavior in the best light. The behavior of others? Different story.

Maybe your customers might enjoy someone with an unusual accent. Or this could be an opportunity to reduce or eliminate lifting in fabrication (not to mention you never know who lifts cars after work at the cross-fit gym!) And the “lazy” employee might have just given you a huge money-saving idea. These days some economists even argue that time on Facebook may mask huge productivity gains at work (although for any of my employees reading this let me say I’m not convinced 🙂

How To Turn Off the Autopilot

In situations like these use the trigger as chance to question assumptions. Your goal is to create cognitive dissonance and get your System 2 (analytical) brain working. Our Hero Assumption Learn and Lead Huddle includes a Trigger Tool. It encourages leaders to reflect on these triggers. But here are three questions to get you started:

These questions will help get your brain off autopilot, and nudge you to face any implicit or cognitive bias. However, there are times when autopilot can be the answer to bias. Like tryouts for a seat in an orchestra. For decades these tryouts occurred out in the open and women rarely won a spot. All that changed over the last 20 years when orchestras started doing “blind” auditions with players behind cloth screens. As Professors Banaji and Greenwald explain:

After the adoption of blind auditions, the proportion of women hired by major symphony orchestras doubled—from 20 percent to 40 percent. In retrospect it is easy to see that a virtuoso = male stereotype was an invalid but potent mindbug, undermining the orchestra’s ability to select the most talented musicians. Two things stand out about the introduction of blind auditions for orchestra hiring. First is that they did the experiment at all; few experts are able to have sufficient distrust of their own abilities to actually put themselves to a test. Second, the fix was simple and cheap—a piece of cloth. Outsmarting this particular mindbug required awareness, a desire to improve, and a method for improving. It did not need to be complicated or costly.

Whenever possible, look for ways to eliminate bias by removing chances for it to happen in the first place. This removes bias from the system instead of relying on us to catch ourselves in the act. But if you still want to stop bias at the source you’ll need a new “autopilot setting” using step 3.

Start thinking about implicit and cognitive bias and it’s easy to get discouraged. Leaders get the chance to act on bias dozens of times a day. And be honest. How often do you look at your employees like drivers on the road I mentioned earlier?

The Hero Assumption isn’t just being nice. It is a key difference maker in how they perform. Research on the Pygmalion effect proves that your assumptions about your team influences how they perform – for better or worse. And it’s not just a good idea for your teammates. The stereotypes and implicit assumptions we make can negatively effect the way we act and behave toward ourselves and even harm our health. One study Banaji and Greenwald cite shows that elderly people who have negative implicit assumptions about age are more likely to suffer from heart disease when they’re older. They conclude:

In understanding mindbugs, a persuasive reason to take them seriously is self-interest: Stereotypes can negatively affect our actions toward ourselves.

Therefore Step 3 is to make the Hero Assumption about your teammates. This must be your “default” position. Anytime you experience a trigger look for how the glass is half-full. Assume positive intent. When your coworker reacts think of them like the Actor instead of the Observer (the same way you would for yourself).

Each one of us faces a complicated set of implicit and cognitive biases. We almost never think about them (after all, they’re implicit). Even worse, they are very hard to overcome. This means we have to always look out for them and be ready to manage them when they pop up. You can do that by:

I know you can handle it. After all, I’m making the Hero Assumption about you.

Do you have any experience with implicit bias in your life? What about cognitive bias? When was the last time you tried to recognize some of your own biases. Does the Hero Assumption come naturally to you? Let us know in the comments.

Sign up for our blog updates and never miss a post. We’ll send you a FREE eBook as a thank-you.